The Economic and Financial Crimes Commission (EFCC) says it has obtained orders for the interim forfeiture of some properties traced to the immediate past governor of Imo state, Rochas Okorocha, and his wife, Nkechi which it suspects to be proceeds from fraudulent acts.

Usman Imam, the Head of the Enugu Zonal Office of the commission, made this known while briefing newsmen in Enugu state yesterday Wednesday September 4th.

“We hope to get permanent forfeiture orders on the property in order to return them to the people of the state,” he said

Imam said all the facilities, including the schools, would remain functional as the commission would not like to shut them down for the sake of the students and other users. 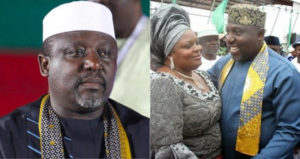