Cristiano Ronaldo has revealed that he is searching for some girls who use to give he and his friends free burgers at a McDonald’s restaurant when he was a kid.

The Juventus player made this known in an interview with Piers Morgan.

According to him, he wants to reward them for their kind gesture towards him when he was struggling as a kid.

”When I was a kid, 11 or 12 years old, we didn’t have money. We lived in the same place (Lisbon) that the other players did, the older players.

”I saw my family in Madeira every three months. It was very hard. A very hard period without family.

“Late at 10:30 or 11, We were a little hungry. We had a McDonald’s next to the stadium, we knocked on the door and asked have you got any burgers,” Ronaldo said.

“There was always Edna and two other girls. I never found them again.

“I asked people in Portugal, they closed the McDonalds, but if this interview can help find them, I would be so happy.

“I want to invite them to Turin or Lisbon to come have dinner with me because I want to give something back, Ronaldo said”. 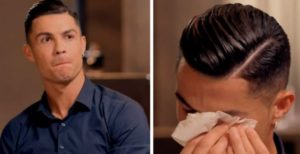