Juventus superstar, Cristiano Ronaldo, was conspicuously missing from the list of nominees for the 2019 Puskas Award, with goals by Barcelona icon Lionel Messi and former Manchester United striker, Zlatan Ibrahimovic, among the top 10 nominations.

Ronaldo had scored a sensational volley against former club, Manchester United, in the UEFA Champions League last season, but it was not good enough to get him a place in the final 10 list of goals in contention for the coveted Puskas Award.

The 34-year-old Portugal international previously won the award in 2009 for his long range strike for Manchester United in a 1-0 win over FC Porto in the Champions League.

Messi on his part has made the list thanks to his audacious lob from just inside the box in a La Liga match against Real Betis, with the Argentina international ending the game with a hat-trick.

Meanwhile, Ibrahimovic has been nominated for his 500th career goal scored in acrobatic fashion against Toronto in a Major League Soccer (MLS) match in September 2018.

The goal scored for LA Galaxy in a 5-3 win saw the Swede join Ronaldo and Messi as the only active football stars to reach the 500-goal milestone. 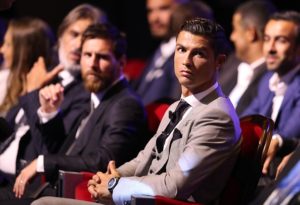