Following the recent xenophobic attacks in South Africa, three countries have pulled out from this year’s World Economic Forum on Africa.

The countries, the Democratic Republic of the Congo, Rwanda and Malawi withdraw from the annual meeting of which was slated to held in Capetown, South Africa, on Wednesday, September 4th, in retaliation to the attacks going on in the host country, Leakers.ng reports.

The World Economic Forum is the International Organization for Public-Private Cooperation. The Forum engages the foremost political, business and other leaders of society to shape global, regional and industry agendas.

In the “Doing business in Africa: a survey of CEOs.” themed meeting, Leakers.ng gathers that PwC Africa presents the findings of a survey of over 80 CEOs from 19 African countries.

It examines their views of the economy, prospects for revenue growth and the key opportunities and challenges facing businesses today.

It also benchmarks their views against those of their global peers.

The recent xenophobic attacks began last week after a taxi driver was murdered by an alleged drug dealer in Pretoria.

Speculations that the alleged killer was a Nigerian sparked protest, looting and burning of business centres owned by foreigners.

Three Nigerians were said to have been killed in the process with scores injured. 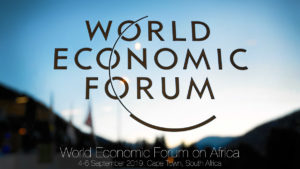