Before a joyous gathering of residents and All Progressives Congress (APC) leaders, Mr. Babajide Sanwo-Olu on Friday gave account of his stewardship in the last 100 days as Governor of Lagos State.

His administration, the Governor said, has brought relief to the people of the State in key areas, thereby improving the well-being of the populace.

In a 45-minute speech, Sanwo-Olu listed activities of his government, which, he said, had yielded positive results since inception of his administration. The event marking his 100 days was held at LTV Blue Roof in Agidingbi.

The Governor said the effort to take Lagos to new heights in line with his campaign promises and manifesto of the APC remained on course, revealing that his administration had taken bold steps to build on the foundations laid by his predecessors.

The Governor disclosed that his Executive Order declaring emergency on traffic management and transportation in the State had brought about reasonable relief to the residents, adding that the effort was swiftly complemented with speedy rehabilitation of arterial roads to reduce travel time and stress for commuters.

He said: “After taking the oath of office 100 days ago, our resolve to make Lagos greater is being manifested through our six pillars of development, known as Project T.H.E.M.E.S. This development agenda was carefully formulated to tackle the problems identified in sectors that are strategic to the growth of our dear State.

“Since we came on board, we have remained committed to the course instigated to make Lagos a 21st century economy and a safe place to live. On assumption of office, we were confronted with major challenges, including traffic management and environmental sanitation. Potholes dotted our highways and heaps of refuse were a common sites in our communities. Traffic situation became a source of concern to residents.

“Within 24 hours in office, I signed the first Executive Order that contained strategy on how we could manage traffic and transportation. The State’s traffic management agency was authorised and empowered to operate two daily shifts to control traffic up to 11pm. We have been achieving desired results in this area.”

The need to restore the aesthetics of the environment and improve the health of residents, the Governor said, led to the immediate upgrade of Lagos’ waste management infrastructure to achieve efficient services in waste disposal and also to realise cleaner environment.

Sanwo-Olu said the capacity of Lagos State Waste Management Authority (LAWMA) was urgently improved on to remove heaps of waste that littered streets and highways, thereby saving the State from an outbreak of epidemic that could result from indiscriminately dumping of refuse by residents after the disengagement of LAWMA by the last administration in overseeing waste management.

This effort, Sanwo-Olu said, was followed by the launch of Blue Box Initiative last Thursday, which would enable the State to create jobs and wealth from recyclable waste materials.

The Governor also said his administration had kept its campaign promise to ease traffic gridlock along Apapa-Oshodi corridor caused by illegal parking of trucks. He noted that his government’s collaborative action with the Federal Government led to removal of the trucks from the affected highways, thereby resulting in improvement of traffic situation on the axis.

He said: “In collaboration with the Federal Government, the Taskforce we set up to remove illegally parked trucks went on tough assignment to return discipline along the Apapa-Oshodi corridor. I am glad to inform you that we have seen tremendous improvement and we are happy with the results in the last 100 days. We will continue to attend to the situation for permanent solution.”

By December, Sanwo-Olu said his government would have completed the Badagry highway to open up the area for business and tourism.

In healthcare delivery, the Governor said the recently concluded “Healthy Bee Initiative” of the Lagos Government in which 25,000 residents benefited from free treatment and surgery was a tip of other programmes being initiated to improve healthcare in the state.

Days after the Governor commissioned a 110-bed Maternal and Child Care (MCC) in Ajah, he said another 140-bed MCC had been completed by his government in Alimosho area. The hospital will be commissioned in two week to strengthen the capacity of the State in providing sound maternity care for residents.

Sanwo-Olu said the State-owned Health Insurance Scheme was being strengthened to extend its services to more than one million residents in order to give them affordable healthcare services. He said the capacity of the primary health facilities across the State was being stepped up for quality healthcare.

On education, the Governor revealed that the State had concluded a plan to recruit more than 10,000 teachers. He said his government had already appropriated resources for the upgrade of public schools, which would also be equipped with required materials to aid quality learning.

To actualise the Smart City aspiration of his administration, Sanwo-Olu said Lagosians, in the coming weeks, would witness the deployment of metropolitan fibre optics across the State. The project, which is being initiated in collaboration with a private telecommunication firm, would provide Internet infrastructure that would aid e-commerce and tech innovation. He added that his government was discussing with key power distribution firms to distribute 20,000 metres to residents to ease challenges of accessing power.

The Governor appreciated Lagos residents for keeping faith with his administration, adding that the support accorded his government made the success of the last 100 days possible.

He said: “My experience during these first 100 days in office has shown that the determination to build greater Lagos is audacious. I can assure all residents that my government and members of the State Executive Council are ready to bring about more programmes and actions that will take Lagos to greater heights in socio-economic development. The coming days will be filled with good governance and more successes.”

Commissioner for Information and Strategy, Mr. Gbenga Omotoso, described the 100 days of the Sanwo-Olu administration as “excessively eventful”, pointing out that the government’s activities had touched security, environment, healthcare, traffic management, education, housing and economy.

Omotoso said the rousing welcome regularly accorded the Governor at every stop was a testimony that the administrations’ development agenda was on course. 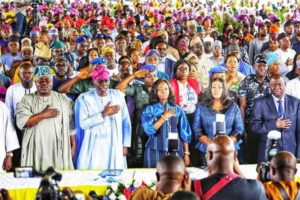