A video of the spot a Federal High Court Judge, Abdul Dogo was kidnapped in Akure, Ondo State’s capital has surfaced online.

Recall it was earlier reported that Justice Abdul was kidnapped on Tuesday October 22, while travelling from Abuja to Akure.

Eyewitnesses at the scene of the incident, said it was a targeted attack and all occupants of the car the High Court Judge was driving in were abducted. The kidnappers have already contacted Dogo’s family, demanding a N50m ransom.

VIDEO: Watch the abduction scene of Justice Abdul Dogo, A Judge of the Federal High Court, Akure that was kidnapped on Tuesday along ibilo/isua road on his way back from Abuja. The Kidnappers are demanding 50million Naira. pic.twitter.com/4vEf1reclL 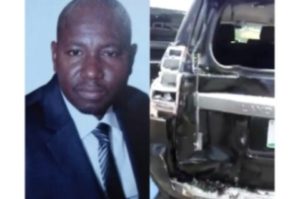