Retired Col Hameed Ali, the Comptroller-General of the Nigeria Customs Service, has said that Nigerians should forget the rule of law and constitutional protections of their fundamental rights where matters of security are concerned.

Mr. Ali’s position, which could trouble legal experts and rights activists, appeared as a reinforcement of the position of President Muhammadu Buhari and Attorney-General Abubakar Malami — both of whom had separately expressed their beliefs that security takes paramount importance over the rule of law.

“When it comes to security, all laws take back a seat,” Mr Ali reportedly said at a press briefing on border closure Monday, The Nation reported.

“We want to protect our nation, we want to make sure that our people are protected. You must be alive and well for you to begin to ask for your rights. Your rights come when you are well and alive.

“Go and ask the people in Maiduguri when Boko Haram was harassing their lives, the only question was survival, there is no question of right. This time Nigeria must survive first then before we begin to ask for our rights,” the Lagos-based paper cited the Customs chief as emphasising at length.

Mr Buhari drew controversy when he said at a conference of the Nigerian Bar Association last year that his government will continue to prioritise national security over the rule of law in relation to allegations of a crackdown on political opponents by his government.

Mr Dasuki has been held in detention since 2015 on charges that he mismanaged a large chunk of money allocated for Defence procurement during his days as former President Goodluck Jonathan’s national security adviser.

Mr Ali insisted at today’s briefing that all land borders will remain shut as a continuation of a closure that began in August.

He said the measure was to improve Nigeria’s economic situation and reduce further exploits by neighbouring countries, the Nation reported. 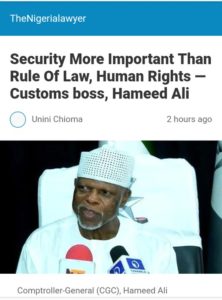