A man has been sentenced to four years in jail after attacking a woman with the intent to rape her.
Jamel Nwokoye, 30 (07.09.89) of Coronet Street, Hackney was found guilty of assault with intent to commit a sexual offence following a trial at the Central Criminal Court in July.

On Friday, 6 September, he was sentenced to four years’ imprisonment with an extended licence period of four years. He is also required to sign the sex offenders register for life.

The court heard that shortly after 02:00hrs on 27 April 2018, Nwokoye began following a 28-year-old woman as she walked alone along Pitfield Street, Hackney.
As they reached the pedestrian entrance to Shoreditch Park, he ran up behind her and grabbed her hair, dragging her into the centre of the park.

The victim fought against Nwokoye but he responded by repeatedly punching and kicking her in the face and body, while continuing to pull her into the darkness.
Several members of the public overheard the woman’s screams and entered the park to try and find her, while also calling the police.

After several minutes, she managed to wrestle free and was able to run away, following which Nwokoye also fled the scene.

Detectives from the Met’s Central East CID began an investigation and extensive CCTV analysis showed Nwokoye as he began following the victim.
Analysis of his movements showed him wandering the surrounding area for 45 minutes and later led to identification of his home address where he was arrested on 2 May 2018.

He was later charged with assault to commit a sexual offence (rape).

Analysis of his mobile phone also revealed an extensive history of accessing extreme pornographic material with specific themes of forced sex and violence towards women.

In his sentencing remarks HHJ Dodds stated that Nwokoye was sentenced on the basis that the sexual offence Nwokoye was intending to commit was rape.
Detective Constable Mark Longley, who led the investigation, said: “Nwokoye is a sexual predator and the CCTV footage demonstrates that he was prowling the streets of Hackney in the early hours of the morning before he alighted on his victim.

“He subjected her to a truly terrifying ordeal which has caused lasting psychological harm. I hope that with the conclusion of this case she is now able to move forward with her life.

“This is commercially produced material which is specifically themed to depict forced sex and violence towards women. It is notable that Nwokoye was accessing this material in the days leading up to this incident some of which bore striking similarities to the assault he would eventually commit.” 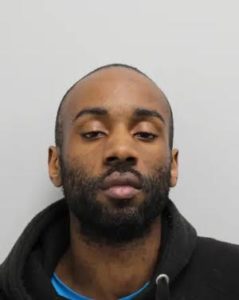