Retiring University College Hospital Ibadan (UCH), Chief Medical Director, CMD, got savaged by staff of the hospital who were happy that he was leaving.

The Retiring UCH CMD, Prof. Temitope Alonge who was savaged by the staff of the hospital, was described as a tyrant who according to them will be remembered for high level of corruption, sales of most UCH assets to himself, his wife and his cronies, zero staff welfare, monthly mysterious death of staff, promotion of mediocrity and disunity, Fadeyi Olori curses and terrorization of the hospital community. They ended their savagery with “UCH is free”. 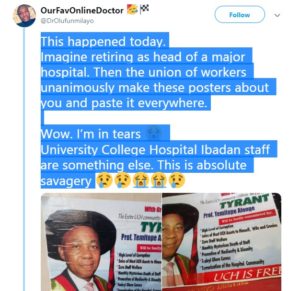