The Senate has also mandated its Committee on Federal Roads Maintenance Agency, FERMA, Petroleum Down Stream and National Planning to immediately carry out a holistic investigation into the non-remittance of the 5 per cent user charge pump price of petrol and international vehicle transit charge accruing to FERMA and other established state road maintenance agency.

Resolutions of the Senate were sequel to a motion by Senator Geshom Bassey, Peoples Democratic Party, PDP, Cross River South).

Buhari writes Senate, seeks to pay Kogi N10bn
Bassey who came under Order 42 and 52 of the Senate Standing Order as Amended, however, lamented the deplorable state of federal roads.

The Senate was concerned that several thousands of lives have been lost to road accidents due to bad and unmotorable roads, while bad portion of roads is a safe haven for kidnappers and armed robbers on Nigerian highways.

In his remarks, President of the Senate, Senator Ahmad Lawan who noted that every part of the country suffers from this problem of deplorable roads, however, expressed optimism that the committees mandated to look into the matter will swing into action and attend to the issue associated with this motion.

Meanwhile, the Senate yesterday rounded off debate on the general principles of the 2020 Appropriation Bill of N10.33 trillion presented before the National Assembly by President Muhammadu Buhari.

Recall that President Muhammadu Buhari had on Tuesday presented a total budget estimate of N10.33 trillion for 2020 Fiscal year to a joint session of the National Assembly.

The Senate last week Wednesday commenced debate on the budget, just as it has adjourned plenary for two to enable heads of Ministries, Departments and Agencies, MDAs appear before the various Standing committees of the Senate to defend their budget proposals.

President of the Senate, Senator Ahmad Lawan has announced that all MDAs must be present and appear to defend their budgets proposals latest Oct 29.

Lawan said this, following the second reading of the 2020 Appropriation Bill as it was immediately referred to the Senate Committee on Appropriations for further legislative inputs.

The Senate also mandated the committee to report back to plenary in two weeks time.

Lawan who noted that the window for budget defence for MDA’s would end by Oct 29, said that any MDA that fails to appear before the said date should forget about the budget defence.

He also advised the Niger Delta Development Commission(NDDC), Nigeria Communication Commission, NCC, the Federal Capital Territory Administration, FCTA, others to present their budget proposals same time with the present ones and be scrutinized this month.

According to him, failure to present the budget would amount to the non-provision of funds for them to spend for the 2020 fiscal year, just as he stressed that the Senate would no longer tolerate MDAs who spend funds without appropriation.

The President of the Senate who said that all MDAs must defend their budget before end of October said that the Senate had put November 5, as timeline for it to conclude matters relating to budget defence.

He urged all the Committee to work closely with the Appropriations committee to meet the set date, adding that it was time for National Assembly members to show that it could pass the budget before the end of the year.

Meanwhile, President Muhammadu Buhari has forwarded to the Senate, the Finance Bill 2019 for consideration and subsequent passage.

In a letter to the Senate through the President of the Senate, Buhari said that the bill seeks to enact fiscal measures supporting the 2020 budget is in pursuant to section 58 and 59 of the 1999 constitution as amended.

The Finance bill 2019 proposes incremental, but necessary changes to Nigeria taxes and fiscal laws to ensure optimal funding of 2020 budget.

According to Buhari, the finance bill has five strategic objectives to include, promotion of fiscal equity by mitigating instances of regressive taxation and reforming domestic tax laws to align with global best practice.

He said that the bill was designed to introduce the tax incentives for investments in infrastructure and capital markets.

The President said that the bill would also help support micro, small and medium size businesses in line with the ease of doing business reforms and raising revenues for government.

According to him, the finance bill proposes an increase in the Value added Tax (VAT) rate from 5 per cent to 7.5 per cent. 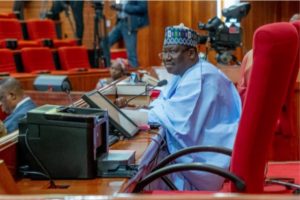