An alleged clash between the police and some members of Sheikh Zakzaky-led Shi’ites group, the Islamic Movement in Nigeria (IMN) which reportedly occurred in the late hours of today November 14, at the Central Market area of Kaduna metropolis allegedly left one dead.

It was gathered that members of the outlawed Islamic group gathered by 4pm to celebrate Eid Maulud and stage a protest but it was allegedly squashed by the police who also countered same in Zaria.

IMN spokesperson, Ibrahim Musa told newsmen that the police opened fire on them during the procession to mark the 17th Rabiul Awwal which is the birthday of the Prophet according to Shi’ites books.

“Reports reaching the Islamic Movement in Nigeria indicate that one of the four casualties recorded earlier when police opened fire on worshippers marking the Maulud in Zaria, Muhammad Salisu has died.

“He was killed by police bullet that pierced the center of his heart when they indiscriminately shot into the crowd with an aim to kill.

“The police, who arrived as the closing prayers were being offered, opened fire at point blank range without warning and hurriedly ran into their vehicles and left the scene.

‘A very colourful Maulud procession that preceded that attack by the police had ended peacefully without an incident” he said.

The Kaduna State Police Spokerson, DSP Yakubu Sabo however denied claims of its men engaging in a bloody fight with IMN members. He also reminded the Islamic group that they’ve been outlawed.

“Yes, we received reports from Good Samaritans at about 1545hrs that, some members of the outlawed Islamic Movement of Nigeria (IMN) were sighted at the Central area of Kaduna Metropolis and our operatives promptly responded.

“However, on sighting security agents, the protesters melted into the mass population of men and women who were maning their legitimate businesses within the market area. There was no encounter whatsoever with the Police and no casualty was recorded as well.

“Furthermore, similar violent procession was carried out in Zaria today by the banned IMN group and it took the gallant efforts of security agents comprising of the Police, Army and the Civil Defence to disperse the protesters and ensure public order and safety. No casuality was recorded as well.

“The Command wishes to remind members of the public that, the ban on all forms of processions in Kaduna State is still in force.

“Hence, the Command will not hesitate to deal decisively with any person or group of persons who are hell bent at causing disharmony or breach of the public peace and safety within the ambit of the law” he said. 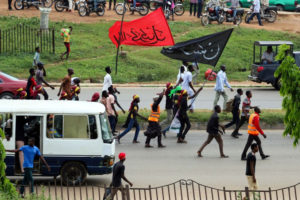