Earlier Yesterday it was reported that Sky B, Nigerian Rapper was confirmed dead at the Federal Medical Centre Imo State after a Heart Attack.

Sky B is very much alive and not dead as it was rumored.

After the news broke out yesterday, some of his friends who called him have confirmed that he is very much alive and the death rumor is staged to make him trend again and also wake up his dying musical career.

Recall that Sky B after his famous time way back 2007 has been working hard and dishing out singles but yet nothing, no recognition, so he put this up as a means to have your attention to his soon dropping singles.

In the city that celebrates the dead only��
Dude has been putting up singles since his previous heats NO NEWS abt it o. Bloggers/Promoters don finally get content. MAKE WE WAKE UP. Nice Move Smart Guy 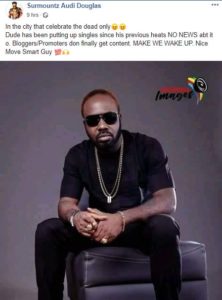