Despite the closure of Nigerian land borders by the federal government in the last three months, smuggling still persists at the border between Nigeria and Niger Republic, THISDAY’s investigation has revealed.

THISDAY gathered that at the border between Jibia in Katsina State and Niger Republic, smugglers have resorted to the use of illegal routes to ferry in bags of foreign rice, bales of second-hand clothing and other contrabands.

However, the Nigeria Customs Service (NCS) has dismissed the observation, calling for either a photograph or video evidence to prove the allegation. NCS also said it would be impossible for smugglers to operate at any of the country’s borders.

Investigation revealed that while strict compliance appears to reign at the main border post between the two countries, illegal businesses still thrived at some bush paths and sundry illegal entry points where unscrupulous security operatives, work hand-in-glove with smugglers to smuggle contraband goods into the country.

President Muhammadu Buhari had on August 20, 2019 ordered a joint border security aimed at securing the country’s land and maritime borders.

But when THISDAY visited the border town of Jibia at the weekend, it was observed that there were some illegal routes that commercial drivers and motorcyclists were using to transport goods and passengers into the country.

It was gathered that rice smugglers were also taking advantage of the lax security to bring their wares into the country but at much higher price than before.

Some of the illegal routes the smugglers used to ferry in the contrabands from Niger Republic to Jibia Local Government Area of Katsina State include Sabon Gari, Dan-Harau, Alele, Makada and Maidabaro roads despite heavy security at the borders.

The smugglers, it was learnt, go through the laborious route of offloading the contrabands few meters away from the official border security post and use J-5 buses, Gulf 4 and 5 vehicles and motorcycles to ferry the items from their hideouts into Jibia for onward transportation to their warehouses in Katsina, Kano, Kaduna, Zamfara, Jigawa States and some other parts of the country.

Residents of the border town told THISDAY that the smugglers were being aided by security personnel, including soldiers, policemen, Customs and immigration officials, who allegedly collected money from the smugglers to allow them a free passage at the 13 checkpoints between Jibia and Katsina metropolis.

A motorcyclist involved in smuggling, who pleaded anonymity, told THISDAY that those of them engaged in the business understood the risks and dangers involved but affirmed that they would not encounter any problem unless they refused to cooperate with security operatives at the checkpoints.

“Unless one refused to pay the bribe for each category of items or when it is time for the officials to sacrifice you to prove that they are working – that is when they will arrest you in the name of smuggling,” he explained.

A commercial driver simply identified as Sule, who specialised in smuggling, said business had been booming for them because they do convey a bag of rice from Maradi (Niger Republic) to Katsina at the cost of N3,000 each.

“We used to charge rice merchants N3,000 for each bag of rice carried from Maradi to Katsina State. Although, we do follow bush paths and sometimes custom officers do arrest us. But once we give them some monies they allow us to pass even though some of them are very stubborn,” he stated.

He, however, lamented that the border closure has contributed negatively to the socio-economic imbalance of the state and the country in general.

When contacted, the NCS Commander in charge of Sector 4 Command of the National Border Drill Operation, Bashir Abubakar, said about 50 suspected smugglers had so far been apprehended and 14 trucks of contrabands intercepted.

He lamented that Jibia border has always been one of their major flashpoints since the commencement of the operation two months ago because of the “mental behaviour” of the inhabitants of the area.

“We have seen that people of that area are not in good terms with government security agencies and it has been a history,” he added.

On the allegation that his officers were extorting money from smugglers, Abubakar said: “I will not say yes, it is true but at the same time I will not deny because we are all human beings and there is no Nigerian that changes name in terms of issues of integrity and character.

“Think of anywhere in the world, there are bag eggs and good eggs. The same thing applies to various agencies in Nigeria – both government and private agencies but anyone found wanting will be punished.”

He added that lack of adequate operational vehicles and banditry has affected their ability to carry out the operation in all the villages in the state.

We Need Video Evidence, Says Customs
When contacted, the Public Relations Officer (PRO) of the Nigeria Customs Service, Joseph Attah said it would be impossible for smugglers to move around easily in any Nigerian border because of the security presence at the borders.

He said officers manning the borders were drawn from security services, which include the police, air force, army, Customs and the Department of State Services (DSS).

“This information is important to me. If you have evidence kindly make it available so I can challenge the Sector 4 Commander. This is something that nationwide, whoever gives that information should give us photographs or video evidence.

“The NCS is very interested in this information. What I can tell you is that this joint border exercise is coordinated by the office of the National Security Adviser (NSA) and there are joint forces, not only Customs officers and they are in all the borders, divided into four sectors. If I have an evidence to back up this information, I will quickly take it up with the Sector Commander and report the matter to the Office of the National Security Adviser.

“This is not Customs alone; the police are there, air force and the army are there; so, if somebody goes to Jibia and is saying that is what is happening in Idi-Iroko is not happening at Jibia, then, I will be interested. This is not Customs affair; it is all security agencies that are there. Your reporter should tell me where he is there so I can connect him with the people on ground to help.

When asked if there is possibility smuggling is still going on in Jibia, he said, “I can tell you that whatever you see happening in Seme, Idi-Iroko and other land borders around the country is what is happening in Jibia, Umfun, Cross Rivers, and Migatiri in Sokoto State.” 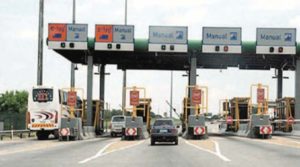