The ongoing Soccer Stars Project for the scouting of soccer talents in Nigeria has continued to identify several talents across states in Nigeria. In Akwa Ibom State, the 60goals Soccer Star Project held a 3day scouting and screening exercise, which commenced 7th to 9th of October, under the supervision of Ukraine National Team Coach, Oleg Dzuiba.

But on day three(3), which was the final screening of those who have already been shortlisted on day 1and2, 22players finally made the list of the 60goals soccer stars project, who will sponsor and promoted across international clubs in the world.

The exercise was well conducted and the players appreciated 60Goals soccer stars project representative for considering Akwa Ibom state as a hub to identify and scout for soccer talents. Noting that even though some of them were not selected, they are still quite thankful because at least about 22 of them had already been shortlisted to join other reknowned world stars across the world.

Some of the institutions and personalities that assisted the successful hosting of the 3days exercise in Akwa Ibom state are Hon. Nse Essien and the management and staff of Ibom Hotel who supported in resources and other gestures to the success of the project in the state. The National Coordinator and Fifa Intermidiary agent, Ms Jane Ndubuisi thanked the host Hon. Nse Essien and specially Coach Oleg Dzuiba, for their suportive and supervisory contributions in helping to improve soccer talents in Nigeria.

Ahead of the 5th state screening exercise scheduled to hold in Abuja at Area 3 football pitch on Wednesday 23rd to Friday 25th October, 2019 by 12:00 noon, 60Goals soccer Stars Project with Ned Nwoko has invited experienced international coach
Guazzoli Gianfranco from Italy to Join the screening coaches to select the best grassroot talents that will commence camping with other selected players across the 5 states where the screening held.

Though some players from other states screening by soccer stars project had already confirmed deals from international clubs enhanced by foreign partnerships across clubs in Europe. 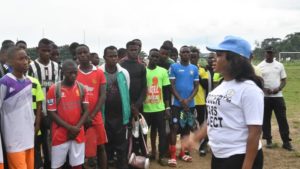