The project commenced with commedable impacts on soccer talents who participated at the Screening Exercise, with records of over 350 Participants, 22 Screened Players and 2 Goal Keepers, as well as International signing deals for 9 Players who perfomed excellently well.

During the sceenining which commenced on the 22nd of August, 60Goals Soccer Stars Project recorded notable turnout of footballers who were drilled in soccer matches, where supervisors, Coaches and managers where present to screen participants and talents based on their performance.

According to the National coordinator and FIFA intermediary Agent, Ms Jane Ndubuisi, she described the kickoff as a success, stressing that the turnouts, performance, supports and devotion was incredible and significantly impressive.

She noted that the project will also commence in other states, as the train of 60Goals Soccer Star Project will be railing through 15states to scout for soccer talents that will be promoted at international levels.The next scouting screening holds in Asaba Township Stadium on 28th August powered by Prince Ned Nwoko Foundation.

Speaking with some of the participating soccer talents, they told our reporters that the initiative is such they have waited for in a long time. They expressed their willingness to learn and be guided by the international Coaches who will train them. 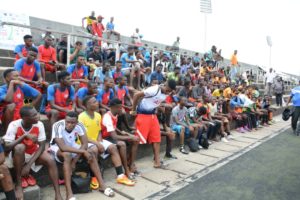