Minister of State for Labour and Employment, Festus Keyamo, has come under attack on social media over his condemning statement directed at former Vice President Atiku Abubakar.

Atiku and the Peoples Democratic Party (PDP) lost at the Supreme Court on Wednesday after their petition against the election of President Muhammadu Buhari was dismissed.

“A man who claims to be a democrat refuses to congratulate the winner of an election, even after highest court affirmed it. Rather, he takes a swipe at all democratic institutions. That’s the hallmark of a bad loser. It appears the Dubai strategy turned out to be the Dubai tragedy,” 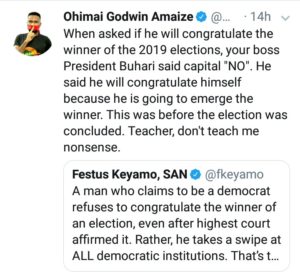