Former Vice President Atiku Abubakar on Sunday urged the Federal Government to increase taxes on the super-rich in order to raise government income as the county slides into recession, Igbere TV reports.

Atiku tweeted his idea of how Nigeria could survive recession after the National Bureau of Statistics (NBS) announced on Saturday that the nation’s GDP contracted by 3.62 per cent in the third quarter of 2020, better than its 6.10 per cent contraction in the second quarter.

Atiku said the recession could have been avoided if the Buhari administration had listened to him and others.

He called on the government to first of all scrap the 2021 budget, saying it “is no longer tenable.”

“For example, a stimulus package, in the form of monthly cash transfers of ₦5,000 to be made to every bank account holder, verified by a Bank Verification Number, whose combined total deposit in the year 2019 was lower than the annual minimum wage,” he said.

On how to fund the stimulus package, Igbere TV reports that Atiku suggested that a luxury tax be placed on goods and services accessible only to the extremely wealthy individuals.

“Now, how will this be funded? By more profligate borrowing? No. I propose a luxury tax on goods and services that are exclusively accessible only to the super-wealthy. A tax on the ultra wealthy to protect the extremely poor,” Atiku said.

The former presidential candidate also proposed a one per cent poverty alleviation tax to be legislated by the National Assembly on the profits of every international oil company and airlines operating in Nigeria, which should also go towards the Poverty Eradication Fund. 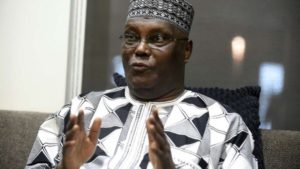