Dotun had earlier announced on his social media platforms that he will be having an interview with Tacha this Wednesday October 16th.

His announcement immediately took a different turn as Tacha’s fans, who refer to themselves as Titans, stormed his page to drag him. Apparently, Dotun publicly condemned Tacha”s attitude to her fellow housemates during the show. Her fans are of the opinion that he should keep the same energy he had while she was in the house now and should not be given an opportunity to interview her.

In a recent post on his IG page, Dotun says he has received threats to his life and might have to cancel if Tacha’s manager, Teebillz, doesn’t address this. See his post and the comments from Tacha’s fans below.

The brand new manger, Teebillz apologizes for any mishap to the fans, as well as Do2dtun and his management;

Big Brother Naija was a game, a beautiful experience with life lessons for Tacha @symply_tacha , every criticism during the show was according to personal views and everyone owns a right to their opinion. It doesn’t necessarily have to be the same as yours or yours as theirs.
Now the game is over, its time for reality!

Tacha is embarking on a fresh start with a completely different journey.

There isn’t going to be a journey without the largest fanbase #TITANS, I know your love runs deep for her brand but we have to extend this love to every human, It is important that THE TITANS are also a part of this growth journey. Let’s spread love always ❤
@do2dtun the management apologizes for any mishap.
We love you all ��� #BillzVIZION #PositiveVibesOnly 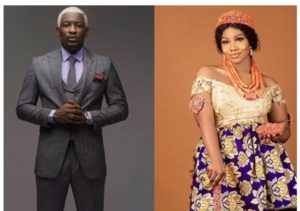