Obi Nwakamma (2007) while describing the dilapidated situation of the Nigerian State opined that, “we have finally created a psychotic society: an emotionally frigid generation nurtured under the ambiance of state terror; young men and women who have been conditioned to regard life as meaningless, except you are rich and powerful by any means, and many who now think that they have no real future; whose highest aspiration is to escape from Nigeria by any means necessary – either by expiration or by suicide”.

Presently, Nigeria is degenerating to a no level standard, where for the youths, values are valueless; where reasoning gives way to irrationality; where mediocrity is adored and extolled at the expense of enthroning excellence; where probity is swapped with betrayal; integrity and hard earned achievement is substituted with pecuniary measures; where hope of better tomorrow is nothing but a mirage; where morality is replaced with immodesty: both inward and outward appearances. Thus Nigerian youths are trying to send to extinction few good surviving morality watchdogs which tend to keep the super ego over active.

Youths with their pristine, candid and pragmatic sense of purpose, willing to contribute their quota for the progress of the country have before them a system which had almost failed in its entirety in pursuance of common good for all; a system where ineptitude, indolence, indifference, ignoble act and insubordination are in-cultured as modus operandi for its workforce, yet a system where everyone seems to be working and yet nothing is produced – above all, a system where sacrosanct of life is threatened.

The mindset of today’s Nigerian youth has been bastardized, bruised and maimed with corrupt and sharp practices, unedifying principles, imbroglio due to social upheaval, indecision due to lack of well-formed information to form the will power, lack of exemplary life from the older generation, lack of human face in seemingly in all the operations and transactions, neglect for essentials, the height of moral degeneration and decaying fabrication of our common existence. With these, it is deceitful to hope that the present Nigerian youths with such mindset will guarantee the wish of our common existence. Even when given the baton of leadership tomorrow, the worst is expected if nothing is done now to remedy the situation because as the days’ run-off, they tend to become more sophisticated in their vices than their virtues, talk more of giving them the baton of leadership.

Yes, all hope is not lost as the worst thing to do in this situation is to deny the fact that we all have what it takes to remedy the situation or accept the idea to let fate take its course. The stark truth here is that all of us live in the same society and the effect of our individual actions are felt by all in the society, that if you right your wrong and I do the same, our world in general will be a better place and the efficacious futuristic existence of Nigeria in particular will be guaranteed in today’s Nigerian youth. 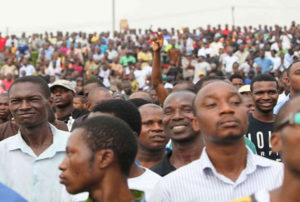