Though the value of the property located at No. 22 Nkisi Aroli street in Onitsha is yet to be ascertained, the owner was however identified as Chukwuma Njeka.

It was also learned that the rear fence of the Onitsha custodial center (formerly known as Onitsha prison) suffered a similar fate as it collapsed at about 6:30 am during the heavy downpour. No life was lost in the incident, neither did any prisoner escape. The scene was cordoned off by the Police to stop any unforeseen development.

The State’s Police spokesperson, Haruna Mohammed confirmed both incidents and he said police officers have been deployed to secure the area. 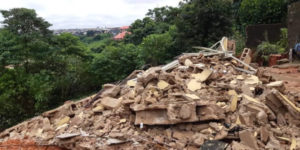