Thugs suspected to be loyal to some governorship aspirants of the Peoples Democratic Party (PDP) in Bayelsa State on Friday threw dynamites close to the party’s secretariat in Yenagoa in their failed bid to stop the ward congress.

It was gathered that the dynamite exploded on the main road some kilometres to the the PDP Secretariat and that nobody was injured.

Sources said the hoodlums, who could not have access to the secretariat because the area was cordoned off by armed police operatives, decided to throw the explosive along the road.
A source, who spoke in confidence, said persons at the secretariat heard the sound of the dynamite adding that the thugs also fired some gunshots.

“Where they threw the explosive was a little far from the PDP secretariat. They could not beat the security around the secretariat because there were policemen everywhere.

“They were on a fast-moving vehicle. The area they discharged their weapons was lonely because most party people were clustered around the PDP secretariat.

“Some persons are simply planning to create an atmosphere of violence to discredit the Congress. But the Congress had already concluded and it was a massive success”, he said.

Loyalists of some aspirants led a protest to the party secretariat where they expressed their grievances to the congress committee and demanded the cancellation of the exercise.
A PDP Ward Congress Committee headed by the Ebonyi State Governor, Mr. David Umahi, arrived the state on Thursday to conduct the ward Congress.

They held meetings with the governorship aspirants at the Government House and later met with other PDP members at the Secretariat where the declared the process open.

Umahi told the protesters that there was no need to demand the cancellation of the conagress since it held peacefully within the laid down rules and regulation of the party.

Though the Police Commissioner, Uche Anozia, could not be reached, a senior police officer confirmed the incident and said the explosion occurred far from the secretariat of the PDP.
He said it occurred in an empty space far away from the secretariat because security was tightened around the PDP building 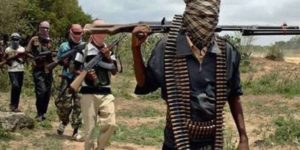