Scores of loyalists and supporters of the national leader of the All Progressives Congress (APC) and former Governor of Lagos State, Asiwaju Bola Tinubu have stormed Akure, the Ondo State capital to solicit the support of the people of the state and the South West region for Tinubu presidency in 2023.

The party made up of politicians and non politicians from all the 18 local government areas of the state were under the umbrella of Bola Ahmed Tinubu (BAT) Network Vision which was also inaugurated in the state today.

The group declared that Tinubu is the best person to lead the country, describing him as a political strategist and grassroots mobiliser.

Speaking, the coordinator of the group, Ayodele maintained that the BAT vision was not just a group but a network movement to showcase the values and promote the essence of Tinubu’s leadership qualities.

Ayodele said the meeting was to garner all minds together under the umbrella of BAT network vision, focusing on how the APC national leader will attain victory as Nigeria’s president in 2023.

He observed that the platform would be used to test run the 2020 guber poll in the state, urging the citizenry to key into the group’s philosophy.

Amodeni, who extolled the leadership virtues of the former governor said: “I believe in Tinubu’s vision; through his leadership at the national level of governance, Nigeria will not be the same in handling the menace of unemployment, insecurity and economic stagnation.”

The former commissioner emphasised that the present hardship in the country especially …economy and security did not start with the APC.

According to him” eight years of the administration of Buhari cannot even solve the multi-dimensional problem in the country. He is just laying the foundation that the likes of Tinubu can build on solidly, if he is given the mandate to rule after 2023.”

He supported the closure of land borders in Nigeria, stressing that most of the fake drugs, illegal arms and ammunition with other contrabands were brought into the country through the land borders.

Amodeni enthused that with the closure, crime rate was reducing gradually, adding that the order should be permanent and total.

Ijabiyi said: “As a Yoruba man, Tinubu is worth celebrating. He has demonstrated good leadership in all facets of life; I am not hesitating to join the crusade of network movement of BAT to promote his vision for Nigeria.” 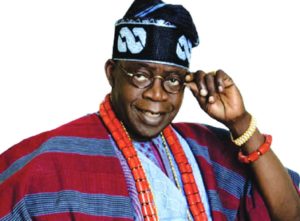