A heavy rainstorm around Michika Local Government Area of Adamawa State has damaged the bridge linking the LGA and neighbouring Madagaili LGA to the rest of the state.

Our correspondent gathered on Monday that the downpour which started on Friday night and continued to Saturday morning affected the Dilchim bridge in Michika LGA so badly that the bridge had remained impassable.

The Dilchim bridge had been one of those in the Madagali-Michika axis bombed by Boko Haram insurgents in 2014 when the insurgents took over seven LGAs in the northern part of Adamawa State, including Madagali and Michika, but although it remained in a bad state as it was yet to be reconstructed, a makeshift passage was created around it, which the weekend flood destroyed.

“Vehicles coming to Michika or Madagali have to stop just before the bridge and those seeking to go out of Michika or Madagali similarly cannot pass to the other side, so we are restricted,” a Michika resident, Florence James, told our correspondent on Monday afternoon.

Another Michika resident however said some travellers had started to find some means of crossing from one end of the bridge to another.

Sunday Stephen, a resident of Bazza, a community close to the Dilchim bridge, said people were using ladders placed over flowing water to get across.

“It is a precarious way to move over but people who have the heart and feel they must get back home or move on to wherever they are going are resorting to this method,” Sunday Stephen said.

Speaking about the development on Monday, the Director General of Media and Communication of Government House, Yola, Mr Solomon Kumangar, said Governor Ahmadu Fintiri had alerted the Federal Government on need for intervention.

Kumangar specified that the governor had extracted a pledge from the permanent secretary in the Federal Ministry of Works to construct an alternative passageway with immediate effect.

A contract had been given by the Federal Government in 2016 for the reconstruction of the Dilchim bridge and nearby Kudzum bridge, both bombed by Boko Haram two years earlier, but execution of the contract had since then remained in limbo. 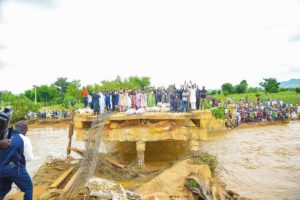