Governor Ifeanyi Ugwuanyi of Enugu State on Monday handed over twenty nine (29) pick-up trucks to the Nigerian Army, Nigerian Security and Civil Defence Corps and the Department of State Services to assist them in their operations in the state. Other security agencies that benefitted from the state government’s largesse included the Nigerian Airforce, Nigerian Immigration Service, Nigerian Customs Service, Nigerian Drug Law Enforcement Agency, Federal Road Safety Corps and National Agency for the Prohibition of Trafficking in Persons (NAPTIP).

Gov. Ugwuanyi, only last week, handed over 65 out of the 100 units of the Innoson vehicles procured and installed with ultra-modern security and communication gadgets by his administration to the Nigeria Police Force, to aid its operations in the state.

Handing over the 29 vehicles to the security operatives during a brief ceremony at the Government House, Enugu, Gov. Ugwuanyi said that the gesture was to ensure that the security agencies in the state were well-equipped and well-motivated to effectively and professionally discharge their duties.

The governor added that the vehicles and the newly-created Forest Guards were in line with the retooling strategy of the state’s security architecture to meet up with the desired standard and tackle the emerging dimensions of insecurity and criminality in the country.

Gov. Ugwuanyi, who promised continuous logistic support for the security agencies, disclosed that the 100 patrol vans were installed with state-of-the-art security systems, adding that 260 motorcycles, 300 bicycles were procured with 18 automated drones for surveillance underway.

Gov. Ugwuanyi explained that the items procured for the security agencies were different from the 260 vehicles and associated equipment being procured for the Forest Guards and Vigilante/Neighbourhood Watch groups, which he said will soon be distributed to them alongside the motorcycles and bicycles for community policing.

“I salute the security agencies in our state for all they have done to maintain our state’s internal security. Our administration will continue to provide you the logistic support to deliver on your mandate. I also enjoin you to fully deploy these pickup trucks to the intended use to enable the realization of the benefits for Ndi Enugu. As a government, we will continue to dedicate our energy to optimal delivery of security services to Ndi Enugu.”

Present at the event were heads of security agencies in the state, including the acting General Officer Commanding (GOC), 82 Division of the Nigerian Army, Enugu, Brig. Gen. Lasisi Adegboye, the State Commandant, NSCDC, Everestus Obiyo, the State Director, DSS, Abinbola Linkinyo, the State Comptroller of Immigration Service, Ayodele Arogundade, among others. 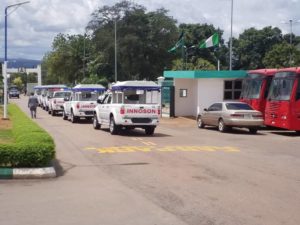