Authorities of the University of Lagos have clarified the invitation of the caretaker chairman of the Lagos chapter of National Union of Road Transport Workers (NURTW), Musliu Akinsanya, to an event on the university’s campus, Igbere TV reports.

MC Oluomo, as Akinsanya is popularly called, was invited as a special guest at a colloquium organised by the National Association of Geography Students (NAGS) on Tuesday, Igbere TV reports.

Although the man was not present, a banner of the event bearing his picture caused a stir on social media.

With critics questioning the propriety of having the man blamed for some of the bloody clashes at motor parks, UNILAG authorities have clarified that he was not eventually invited for the event.

A rejoinder signed by the principal assistant registrar, communication unit, Taiwo Oloyede, on Friday, however, said there was nothing wrong with inviting people of diverse interests to the school.

“The Management of the University of Lagos hereby notifies parents, guardians and other stakeholders of the University that it is aware of the event to which the Lagos State Caretaker Chairman of the National Union of Road Transport Workers (NURTW), Musliu Akinsanya, was allegedly invited.

“The event was a Colloquium on Transport Efficiency: Employing Lagos Terrain Alternatives organised by the National Association of Geography Students (NAGS) an Tuesday, September 17, 2019.

Mrs Oloyede asserted that although MC Oluomo was one of those to be invited, which informed the draft banner with his picture, the approved banner did not have him as an invited guest, neither did he attend the event

“For the record, events are organised on campus to expose students to current trends in the academia and Industries. During such events, experts and relevant stakeholders with considerable knowledge and experience on the theme of such activities are carefully selected and invited to come and share their thoughts with our students. The goal is to produce students that are locally relevant and globally competitive, ” the school defended.

The authorities, however, urged the general public to disregard “any propaganda making the rounds on social media about the propriety of inviting a particular guest or not.” 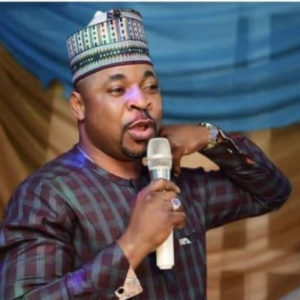