Top US Democrat Nancy Pelosi said Sunday that she believes the impeachment hearings against Donald Trump produced “enough testimony to remove him from office” when the case moves to the Senate. Speaker Pelosi will meet with the House Democratic caucus early Tuesday to prepare for the formal vote required to send the Senate the two articles of impeachment passed by the House last month. The Senate trial is expected to be held quickly, with Republicans holding enough votes to easily dismiss the charges of abuse of power and obstruction of Congress.

Pelosi has withheld the articles since the House impeached Trump on December 18 over allegations that he improperly pressured Ukraine to investigate his potential 2020 election rival Joe Biden, and obstructed the subsequent congressional probe. Pelosi had hoped to pressure Senate Republican leader Mitch McConnell to agree to allow witnesses and new evidence in the trial.

He has not budged, however.

Still, she said Sunday that the delay had accomplished important things. “We wanted the public to see the need for witnesses,” she told ABC. 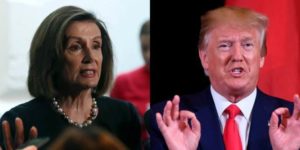