At about the same time that President Muhammadu Buhari eventually consented to let Shiite leader, Ibrahim el-Zakzaky, go on medical pilgrimage to India, another executive prisoner was making his way to jail. Omoyele Sowore, founder of SaharaReporters and one of the presidential candidates in the 2019 elections, was arrested by the DSS for daring to call for #RevolutionNow.

The significance of this “prisoner-swap” was not lost on all of us. A close friend whispered to me that, “The President must be under strict instructions from his spiritual advisers (they are no longer called marabouts or juju priests) to keep a certain number of people incarcerated to appease the gods of power.”

It turned out that el-Zakzaky’s trip to India was just a ruse. It was actually to appease a number of the DSS officials who were given an all-expense-paid trip abroad with taxpayers’ money. Lucky chaps eh? The Shiite leader and his wife got to India alright, but claimed there was nothing medical about their visit as security officials were literally running the tests by themselves! There were even insinuations that the couple were more unsafe in India than Nigeria as they could have been easily dispensed with under “medical supervision” – if you get my drift. So, they speedily asked to be flown home without further delay.

But this story is about Sowore, not el-Zakzaky, and I promise not to digress any further.

As we speak, the Ondo-born media buff is still cooling his feet in gulag. A competent court of law has denied him bail, insisting that security authorities have a right to hold him for up to 45 days while “investigating” his crime. That’s another way of sentencing one to jail well before one’s case is heard, and “nothing will happen.” Or saying that it is procedurally right to arrest someone before deciding whether or not they committed a crime! This is a wonderful time to be a law enforcement officer!

Many of us are beginning to worry that Nigerian courts are gradually putting a judicial stamp of authority on executive rascality in a constitutional democracy.

But there’s a bright side: We’re making steady progress up the ladder as one of the most draconian democracies of the world. Recall that only recently we became the poverty capital of the world. So, more trophies are coming our way. Besides, we should be grateful to God that our President is not the leader of Hong Kong where the youth have been protesting for months now.

What Sowore’s jailers probably don’t reckon with is that he is a well-rehearsed jail tenant. In his earlier days as a student union leader at the University of Lagos, he was on several times arrested and detained for activism. He even lost two years in school for his persuasions. So, he’s not exactly an aje butter who would break down and cry under incarceration. Instead, his convictions and resolve will solidify. Throwing such a guy into detention is like pouring petrol on fire.

The Igbo have a saying that a wrestler who pins another to the ground pins himself also. He is free only when he lets his opponent go. The lyrics of the inimitable singer, Asa, re-echo the same message in her hit song, Jailer: “I’m in chains, you’re in chains too; I wear uniforms, you wear uniforms too…”

For as long as the like of Sowore and el-Zakzaky are in jail, President Buhari is in their company also. He is in the jail of public perception and opinion. If they catch diarrhoea, the President’s bowels must move violently also – in view of what happened to MKO Abiola in 1998. Rushing in and out of toilet is not the best way to go about the difficult task of leadership. It’s evidence of jail of the mind. As Fela Anikulap-Kuti would say, “All jail na jail.”

If I were Buhari, I would not do Sowore the honour of throwing him into detention. The guy would quickly morph into a superstar, for God’s sake. I would remind myself that all through history, jail has been the breeding ground for soon-to-be leaders. Mugabe, Mandela, Obasanjo… the list is endless. Why would I want to turn “that small boy” into a celebrity with my own hands?

I would turn his “insult” into motivation for “revolutionizing” governance in Nigeria. I would go into my room, lock the doors and think long and hard about how to please the people I lead once again. I would drive members of my cabinet to their limits until they come up with bright ideas (beyond Ruga) to dispel the darkness now gathering around Aso Rock. I would shake those fat cats up so much that their heads would spin. After all, they are in the same boat with me, enjoying the ride and taking none of the heat.

I would insist that every minister, special adviser or special assistant genuinely earns their pay. Not warm their seat all day as they currently seem to be doing. Except, perhaps, the problem is not with the ministers but with the Chief Minister himself!! In that case, I pass. No comment.

Leadership is not a tea party. Leading a country like Nigeria is not for the faint hearted. I am often tempted to feel sorry for Buhari, considering his many travails. But I refuse to give in to that temptation. After all, we no send am. It doesn’t make sense to feel sorry for a man who crawled, craved and cried for a job and eventually got it. Then, he went to sleep on the job! Even when he had a glorious chance to walk away, he let vanity get the better of him. So, he must serve his (jail) time in Aso Rock. We’re all prisoners of the choices we make.

I don’t know what his intelligence chiefs are telling him. But I can tell they’re doing him no good. Should the President by any chance be interested in “original” “follow-come” intelligence from the streets, I would be glad to offer it here for free: Oga, there are nearly 200 million Sowores out there who are earnestly asking for a revolution. Their eyes are red with hunger and anger. Even the operatives are Sowore; it’s just that they’d rather not admit it.

I know that our security chiefs will not like me for putting it so bluntly and, as we say in Nigeria, for trying to “commot garri from their mouth.” But I owe them no apologies. After all, Nigeria is already one big jailhouse. We’re all just changing rooms within the jail.

Anazonwu is a historian and author of the book, What Everyone should know about Nigerian History, Politics & Government 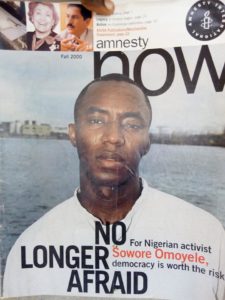