The Independent National Electoral Commission (INEC) on Friday said it will not join issues with Comrade Adams Oshiomhole, National chairman of the ruling All Progressives Congress (APC) over the Supreme Court judgment on Bayelsa governorship election.

The apex court yesterday sacked the APC’s governor-elect in Bayelsa State, David Lyon, and his running mate, Biobarakuma Degi-Eremienyo and pronounced the Peoples Democratic Party (PDP) candidates, Douye Diri and his running mate, Lawrence Ewrujakpor as the winners of the election held in the state.

It gave the ruling after it had found irregularities in the credentials of the ex-APC deputy governor-elect in Bayelsa State, Degi-Eremienyo, and annulled the joint ticket of both Lyon and Degi-Eremienyo.

The apex court then ordered INEC to issue fresh certificates to the candidates of the party with the next highest votes.

However, in a press conference on Friday afternoon, Oshiomhole rejected the result and accused INEC of creating crisis in the system by issuing certificate of return to Diri.

Oshiomhole added that INEC wrongly interpreted the Supreme Court judgment, thereby creating illegality in the electoral process.
“INEC has assumed the position of the court by interpreting the judgment the way it has done, which it has no power to do so” he said.

However, speaking in a chat with Daily Independent, Rotimi Oyekanmi, Chief Press Secretary to the INEC chairman said the electoral body only complied with the ruling of the Supreme Court just as it did with the judgment on Imo governorship election.

“It is not the Independent National Electoral Commission’s practice to join issues with politicians on any matter, especially on issues under its jurisdiction”.

“The Supreme Court on 13th February 2020 delivered a judgment in a pre-election suit on the Bayelsa State Governorship Election held on 16th November 2019”.

“INEC received the Certified True Copy of the judgment on 14th February, convened a meeting this morning to study the judgment and at the end of that meeting, took a decision to comply with it”.

“Therefore, as far as we are concerned, we have done what the Supreme Court ordered us to do and we couldn’t have done otherwise” he said. 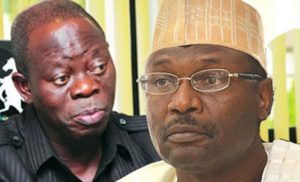