In response to the losses incurred by Nigerians, the House of Representatives has said it will approve funds for victims of the attacks who wish to take legal action against the country.

It also said it was considering compensation for those affected by the attacks.

The Speaker, Femi Gbajabiamila, said these while addressing journalists at a ‘world press conference’ held in Abuja on Friday.

The Speaker warned South Africa against labelling Nigerians in their country as criminals, asking it not to add insult to Nigeria’s grief.

He also noted that for South Africa not to be seen as encouraging and justifying the xenophobic attacks by its citizens, the government should openly dismiss the narrative that the attacks were provoked by the alleged criminal activities of Nigerians in the country.

While commending the actions so far taken by the Federal Government, he said the President should direct the Ministry of Health to assist the bereaved families in expediting the return of their loved ones who had lost their lives in the unfortunate events.

He said, “The time for speaking has long passed and the time for action has come to us with a fierce urgency demanding nothing less than our total commitment to revoking the old arrangements that have made such abominations against our people possible.”

“Too many a time, we are called to stand as pallbearers, bringing home to bury the bodies of our brothers and sisters, fathers and mothers, our children, savaged and decimated. What is their offence? That they dared to dream of glory and profit beyond our borders; and having dreamt, they endeavoured to make real the visions of their heart.

“We reject entirely the obvious attempt to change the true narrative of events by casting the recently organised acts of violence as a merely internecine conflict between gangs fighting for turf.”

Gbajabiamila stressed that the House was ready to authorise funding “for those citizens who wish to take legal action against identified perpetrators of the violence as well as those who sponsored them or permitted their actions to occur and to continue.”

He pointed out that the House would work with all the stakeholders within and outside government to evolve and implement a plan to evacuate Nigerians from where internal crises and conflicts have made the terrain unsafe for them.

He added, “We expect that the Government of South Africa will conduct a thorough investigation into these allegations and make public their findings, whatever they may be. Where any of these claims are determined to be true, we expect also that the individuals responsible will be held accountable to the highest degree allowed by law.”

Gbajabiamila announced the plan of the House to suspend its two-month annual recess to discuss the crisis, adding that the lower chamber would invite the Minister of Foreign Affairs (Geoffrey Onyeama); the Nigerian High Commissioner to South Africa (Kabiru Bala); the Chairman of the Nigerians in Diaspora Commission (Abike Dabiri-Erewa) and other stakeholders to review the issue.

A member of the House, Mr Kingsley Chinda, had in a message to our correspondent on Tuesday called on the National Assembly to reconvene for two days and condemn the alleged refusal by the Nigerian High Commission in South Africa to protect citizens running to it for safety. 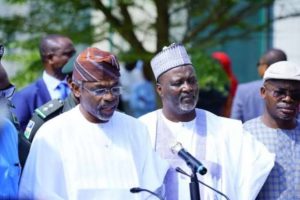