As publisher and convener of the planned RevolutionNow protest continues to remain in detntion, the Department of State Security DSS, says it will only be releasing Sowore to appropriate persons.

DSS made this known in a statement released by its Public Relations Officer PRO, Dr Peter Afunanya. The security agency says appropriate persons were yet to turn up to take his delivery adding that he would be released once the processes were concluded

“While all those that have so far shown up are not directly concerned with the matter and therefore unqualified; many others have either chosen to grandstand or politicise it to achieve hidden interests. The service reassures the public that it will not waste a second to release Sowore if the proper processes are followed,” he said

The DSS accused Sowore’s lawyer, Femi Falana, of playing to the gallery by making claims in the media that the DSS has refused to release Sowore despite meeting his bail conditions.

“It is even more disappointing that Mr Femi Falana, who is a senior lawyer, would wrongly guide his client and supporters. He is rather playing to the gallery and mobilizing miscreants to subvert the Service and other state authorities. He has excellent relationship with the DSS. But in the circumstance, he has refused to reach out to him over the case like he had on previously related ones. For the avoidance of doubt, the Service restates its commitment to the rule of law and particularly respect to the court,” he said.

He also denied claims that its officers openned fire on Deji Adeyanju and other Nigerians who staged a protest in front of its office on Tuesday November 12th to demand Sowore’s release. Afunanya said its operatives stood in defence of their facility when some group of persons made unruly attempts to forcefully break into DSS to effect the release of Sowore. 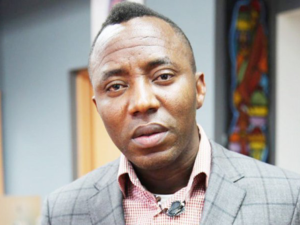