“…with the NSA involved I was fine with it. Afterall he is the chief accounting officer of Nigeria’s national security. If he wants to buy it at N100 billion who am I to say no?”

Two years ago, as the late evening sun cast the cityscape in brilliant colours and long shadows, the two of us dragged our chairs under the Ube tree behind the Abuja office of PREMIUM TIMES. The setting sun had left room walls radiating excess heat.

My guest was a contractor who was turning his back on the Nigerian defence contracting gang. It was the second day of a series of interviews that lasted several months. A tripod propped a camera in front of us as he squealed on his collaborators and described a particular corruption-ridden, hyper-inflated gunboats purchase contract he masterminded.

“Why did you not back out (when the government guy approached you to inflate the cost)”? I asked. “…for the sake of the country. For patriotism.”

“Well, you are talking about morals, ethics or considerations like that, but don’t forget that this is a state affair and the state does not embody morality neither does it embody those fine sentiments that people will wish to attribute to it,” he said.

“The state is a living thing of its own and our kind of state is a very predatory state. It thrives on power. Absolute power. And the basic source of capital accumulation for those running the state and their political matters is through primitive accumulation of capital, otherwise theft.”

My guest was describing an inflated contract in which the government was paying him to buy military boats that it already paid another contractor to supply.

Details of this and other tainted contracts are the focus of a coming PREMIUM TIMES investigative series that will reveal the greed and lack of patriotism of some of our country’s security chiefs, abuse of public trust and mindless theft of public funds that characterise defence procurements in Nigeria.

A number of past Nigerian officials are currently undergoing trials for alleged corruption-related offences linked to defence procurements.

Back to my guest. He told me he decided not to walk away from the fraudulent deal in question because it posed no immediate legal threat.

In fact, the deal, he said, got the backing of two National Security Advisers – Andrew Azazi and Sambo Dasuki. 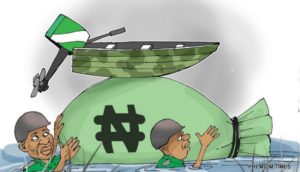