The senator who represented Kaduna Central in the 8th National Assembly, Shehu Sani, has said the ruling All Progressives Congress (APC), which started with President Muhammadu Buhari as its presidential candidate will fizzle out in 2023.

He said the future of Nigeria is dependent on having a political party with credible leadership and a clear ideological direction of which the People’s Redemption Party (PRP) represents.

According to The Guardian, the lawmaker made the remarks on Tuesday, August 20, while receiving the executive members of the PRP on a courtesy call to his residence in Kaduna. They were led by the state’s party chairman, Hon. AbdulRahman Haruna Danbirni.

The executive members, who briefed Senator Sani on the party’s upcoming national convention, also called on him to contest for the party’s national chairmanship position, hailing his achievements while representing Kaduna Central at the Senate.

Senator Sani, however, noted that one of the major tasks before PRP remains the reformation of the party for “men of honour and integrity to take over relevant positions and win elections in 2023 in order to free Nigerians from deception, fraud, and misrepresentation of which the ruling APC is notorious.”

The lawmaker said the ruling “APC begins with President Buhari and it will end with Buhari,” adding that there is no ideological relationship between the masses and the ruling party.

“The ruling APC is not different from the party they overthrew, and that is why so many people have left the party. Most of the people who are in APC today are going back to PDP. They are with Buhari because he is in power. And they will leave Buhari the very day he leaves power.

“They are not with Buhari because of his ideas, integrity, and thinking. Where were they in 2003, 2007 and 2011? They were with PDP. Buhari will not know who his friends or enemies are until he is out of power.”

Meanwhile, Vice President Yemi Osinbajo has asked members of the Peoples Democratic Party (PDP) to consider joining the APC before they die.

Osinbajo jokingly made the comment at a dinner to mark the 80th birthday celebration of former national chairman of the APC, Chief John Odigie-Oyegun. 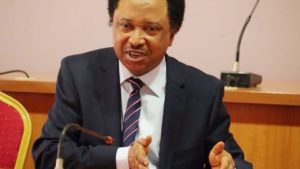