Aisha Buhari, the First Lady, has stated why she was away from the country for months.

Mrs Buhari reportedly left the country in August for Saudi Arabia and from there to the United Kingdom.

She left the UK Saturday evening and has landed in the country in the early hours of Sunday morning.

While she was away, reports of power tussle involving her and alleged cabal of her husband, President Muhammadu Buhari, went rife.

The latest of such is the recent false report by some online news portals that the cabals has picked another woman to be the second wife of the president.

Explaining why she was away, Mrs Buhari said she went to take a well deserved rest.

Suleiman Haruna, her spokesman in a statement, confirmed that the first lady arrived at the Nnamdi Azikiwe International Airport at 4.30am via a British Airways flight as earlier reported by TODAY POLITICS.

“Speaking to reporters on arrival, Mrs Buhari said she was happy to be home after a well-deserved rest,” the statement said.

“She confirmed that she was fully rejuvenated to continue the work of improving the health and well-being of women, children and other vulnerable Nigerians.

“She used the opportunity to thank her husband, family and well-wishers for their support and encouragement.

“On hand to receive her were wives of present and former governors and many associates,” it added. 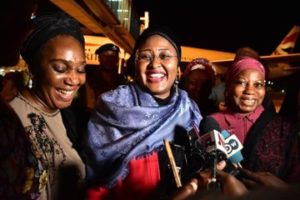