Ike Ekweremadu, the immediate past Deputy Senate president, was humiliated by suspected members of the Indigenous People of Biafra (IPOB) at a function in Nuremberg, Germany today Saturday August 17th.

As of that time of the attack the reason was yet to be ascertained, it was reported earlier the IPOB members were throwing stones at Ekweremadu. The politician who was immediately whisked away from the venue by the organisers.

Below is the video Update while the attack the former Deputy Senate President.

Update: Fulani men are raping our women and you are here celebrating- IPOB members speak on why Ike Ekweremadu was attacked.

In a video shared by Radio Biafra, the aggrieved Biafrans say they are against their leaders celebrating New Yam festival in Germany when their indigenes back home are being killed, raped and attacked by Fulani herdsmen.

According to one of the aggrieved man he said i will be here, am not afraid of police ,the will be no celebration here. 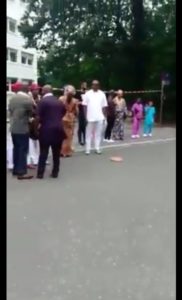