Rivers State Governor, Nyesom Ezenwo Wike has declared that Nigerians must unite and motivate the Nigerian Armed Forces to defeat the insurgents in the North-East.

The Rivers State Governor also announced that the State Government has committed the sum of N100million for the scholarship programme dedicated to the children of the fallen heroes.

He spoke on Wednesday during the Wreath Laying Ceremony in Commemoration of 2020 Armed Forces Remembrance Day Celebration, at the Isaac Boro Park, Port Harcourt.

He said: “The war on terror in the North-East has raged for too long, claiming too many military and civilian victims.

We must come together as a nation to do whatever that is necessary to support and motivate our soldiers to win this terrible war as quickly as possible and save the nation and our brothers, sisters and the children from the North-East from the continuing violence, abductions, and devastation by Boko haram and their affiliates.

“Apart from supporting the establishment of a trust fund, I have directed the Secretary to the State Government to work out areas of support to the State Chapter of the Nigerian Legion and the families of soldiers of River State origin who pays the ultimate price in the active service of our country. In addition, the State Government will provide scholarship for their children up to university level.

“N100million has been committed to the scholarship of the children of the fallen heroes by the Rivers State Government. We will also construct a Secretariat for the Legion, but not at Isaac Boro Park. We will develop the park into a Tourist Centre.”

Governor Wike said that the nation remembers the members of the Armed Forces for their contributions to the unity of the country.

He said: “As a State we cannot thank you enough. And, as a people we will forever venerate you and your families for your valiant services and sacrifice for us all.

“Yes, we are here for the customary remembrance rituals, but for us, this cannot be enough. The greatest honour we can give in return for your service and sacrifice is for us to continue to work together for national peace, unity cohesion.

That is what the military signifies, which essence and ideals are what we must rededicate ourselves to advance for the progress of our country.”

The Governor said the ceremony gives Nigerians the opportunity to reflect on the sacrifices and contributions made by the armed forces in the service of the country.

He said: “But for the extraordinary courage and devotion to the unity and indissolubility of our country by the Nigerian armed forces; those who served during the civil war and those who continue to join and serve to date, there would have been no Nigeria today to call our own great country and celebrate as the leader and hope of the entire black race.

” Today, we can confirm that it is the patriotic operations of the Armed Forces of Nigeria on land, air and in our creeks that are largely responsible for the improved and sustainable peace and security that we are enjoying across Rivers State and its environs.

“What is most significant is the extraordinary courage to still render this duty knowing that the end could result in death. Indeed, if one may ask: what or which service and sacrifice for a people, for humanity, can be greater than this, for anyone to die for the sake of his or her friend?”

The Chairman of the Rivers State Command of the Nigerian Legion, ACG Justice Chichi thanked the Rivers State Governor for his extraordinary kindness towards the welfare and support of ex-servicemen and families of the fallen heroes.

He called on the Rivers State Governor to assist the Legion with financial support for the sustenance of scholarships for the children of the fallen heroes.

The Legion Chairman also appealed to the Rivers State Governor to build a Secretariat for the Legion. 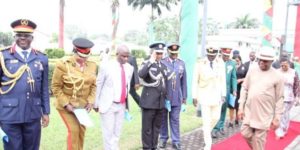